Learn about the earliest in-“car”-nation of Cars Land from Creative Director Kevin Rafferty in this star-studded episode of Mousetalgia, recorded directly from the 2013 Pacific Northwest Mouse Meet, featuring four exclusive interviews covering many fascinating aspects of the Disney company. First, we speak with Dave Smith, the director emeritus of the Disney Archives, who tells us some secrets of his years with the company. Learn which items Dave broke, Dave’s opinions about the nature of collecting, and his explanations about how the Disney Company and Disney family share items and information. Next, we talk to Kevin Rafferty about his long, productive career with Walt Disney Imagineering, including a behind-the-scenes look at the “It’s Tough To Be a Bug!” attraction, and his leadership in the development of Cars Land. Finally, we attempt to corral Bill Farmer and Tony Anselmo, two of Disney’s most popular voice actors, into a dual interview with varying degrees of success. Hilarity ensues! Plus – a sneak preview of next week’s report from the Mouse Meet. Also, don’t forget to mark your calendar for Aug. 8 at 4 pm, when the official Mousetalgia Pre-Expo Meet-up will be held on the patio outside of Trader Sam’s at the Disneyland Hotel with a special guest. Don’t miss it! 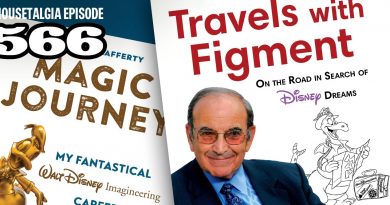