Its always awkward seeing someone get yelled at. It’s doubly awkward when somehow you get involved. You know what I’m talking about – the Black Hole of Awkwardness. You don’t see it coming, you don’t know how you got involved and you definitely don’t know how to get out of it.

Jeff and I were standing in line for an autograph session when a Cast Member ended up closing the line which put Jeff and I as the last eligible autograph seekers. A very angry woman sporting a Goofy sweatshirt, Voluntear Mouse ears and a fully loaded pin lanyard, was less than pleased when she arrived a few moments later and the line was closed. Instead of moving on to another event, she decided to start a progression of heckling, yelling and eventually berating at the CM who had closed the line. (On a side note, an outfit consisting of 80% Disney normally lends itself to a cheerful demeanor, but when things go wrong for the wearer, watch out.)

With her Mickey ears white hot with rage and her pin lanyard cradled in her stubby little fingers that screamed “Don’t make me nun-chuck you with my collectible Haunted Mansion pins,” the Black Hole of awkwardness began.

A female Bruce Banner transformed before our very eyes into the D23 Hulk. (While I’m not a Marvel fan, somehow this analogy seems most appropriate and by the Letter of the Law, is now allowed in all Disney blogs. Sigh.) Her rage, built upon a foundation of getting stuck with Pluto instead of D23 Mickey in the photo op, choosing to visit the collectors tables instead of attending the Keynote where Jonny Depp had made his surprise appearance as Captain Jack Sparrow, and a dangerously low blood sugar level caused by an obvious lack of Churros and Mickey Paddle Pops not only became the CM’s problem, but also the Black Hole that almost ended our D23 experience as well.

The CM, clearly not knowing what to do, simply turned her back on D23 Hulk and started to talk to Jeff and I about anything and everything her pretty little Disney head could think of; how she won the canoe races this year, sometimes she works extra shifts when Fantasmic is running, she’s been waiting for ages to work on Pirates, and on and on and on. Each story got faster and more intense and coupled with the rage of the D23 Hulk, grew the Black Hole of awkwardness to an overwhelming vortex of swirling death. Jeff and I had to do something. With our eyes filled with fear and a determination that said “We will see our loved ones again,” we dropped our swag bags and started to run as if Chernabog himself was in the middle of the Black Hole.

Well…that’s what we wanted to do. Instead, we just stood there giving each other looks that said “This is the most awkward moment of my life. Please, someone stab one of the Hulk’s pins into my ears and another in my eyes because that would be better than this.”

Ridley Pearson was our savior that afternoon. His lanky writers arm reached into that Black Hole and pulled us out with an autograph, a photo op, and an chance to get the heck out of there. We owe him kudos for great writing, but also a kidney for saving our lives. 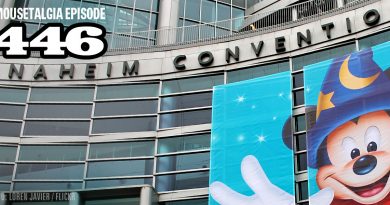