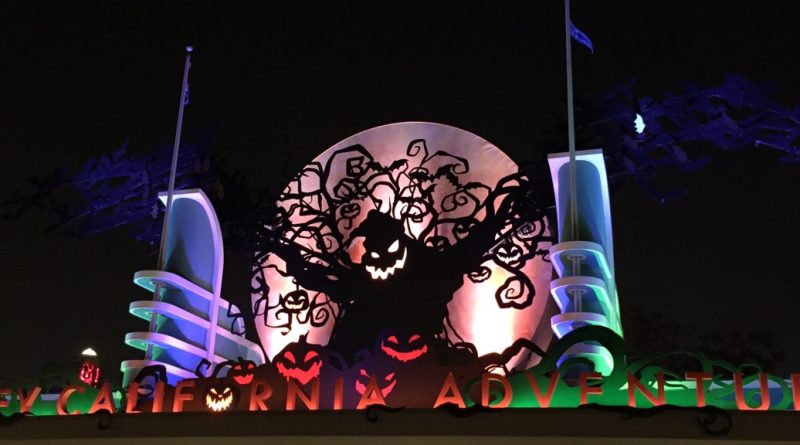 We are now a couple of weeks into Halloween Time at the Disneyland Resort. Festive pumpkins adorn Main Street, USA and fun parties are well underway in the original Magic Kingdom. However, I want to focus on the little park across the esplanade from Disneyland: Disney California Adventure – which is absolutely winning this spooky season.

If you have fond memories of Candy Corn Acres, this Halloween Time will leave them in the dust as the park revs up with spectacular (if not slightly sinister) decorations park wide. From Oogie Boogie above the park entrance, to the Headless Horseman on Buena Vista Street, Haul-o-ween in Cars Land, and the beautiful Plaza de la Familia down by the boardwalk – there is an abundance of Halloween treats to keep you busy and you will not be disappointed if you don’t have a ticket to Mickey’s Halloween Party.

The entrance sets the tone before you even enter the park. A huge orange moon with dark twisty trees and menacing pumpkins accompany the master of scaremonies, Oogie Boogie who talks to the crowd sporadically. Buena Vista Street is decked out with purple lights in all the trees, retro looking bat banners on all the light posts, and a 13 foot Headless Horseman statue in the place where the holiday tree usually stands later in the year. There is a Photopass photographer stationed at this spot all day to take pictures of guests. Perhaps 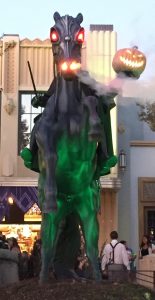 consider taking pictures with the statue at different times of the day as the lighting changes once it starts to get dark.

Speaking of getting dark, as day turns to night there is a creepy lighting ceremony of Buena Vista Street that happens around twilight each night. Oogie Boogie once again takes center stage and lights the whole park at once and the mood changes dramatically. Steam begins to pour out of the Horseman’s stead’s nostrils and fire lights the eyes and mouth of his pumpkin head – definitely not to be missed! If you don’t mind waiting, once it’s starting to get dark consider grabbing a seat on the bench around the Headless Horseman and enjoy the ambiance. 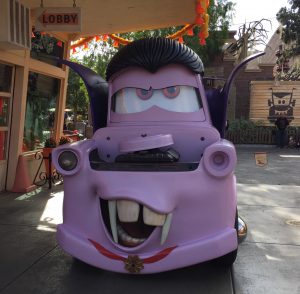 Cars Land is the next treat California Adventure has to offer. It’s no trick: the entire land has been festooned with chain link spider webs, gas can pumpkins, and monster cones. It is spooktacular! There are many photo ops to visit and details to take in so prepare to spend some time in this area. As Becky mentioned on the show, Mater is in costume as Count Materla (not sure if that’s the official name, but a very enthusiastic cast member called him that so I’m going with it), while Lightning McQueen is dressed as a superhero, Cruz Ramirez is a pirate (with a hat so big that Captain Barbossa would approve), and Big Red is a big clown (to the dismay of one little boy who was so scared that he nearly jumped out of his skin when Big Red honked his horn to say hello).

Two of the three rides have been re-themed for the season. Mater’s Graveyeard Jam-boo-ree and Luigi’s Honkin’ Haul-o-ween. Both rides have special decorations and soundtracks for the occasion. Because of the seasonal changes the lines for both of these attractions have been a bit longer than usual so keep that in mind while you are touring the park. Radiator Springs Racers has not been themed for Halloween 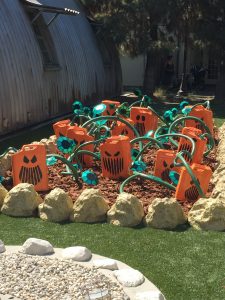 this season, but there is something in the works as they expand this holiday in upcoming years. I cannot wait to see what else they come up with.

California Adventure has been doing a great job lately offering park goers different festivals throughout the year, and this fall is no exception. With the wrap up of Summer of Heroes, the park now has the Plaza de la Familia which is both a celebration of Día de los Muertos (Day of the Dead) as well as a teaser for the upcoming Pixar film Coco. There are special music performances (check daily times guide), complimentary 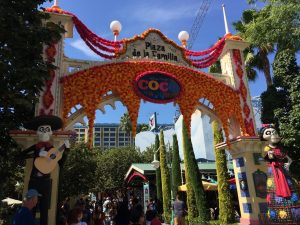 face painting (which usually starts around 11am),  floral headbands (made to order), the Árbol de la Vida (Tree of Life) which is a fun photo location (with a magic photo) as well as a place to share family memories. There is also a special menu at the Paradise Garden Grill, and an accompanying display to get you excited for the upcoming movie.

With all that there was to see, I didn’t even get into the food! If you want an exhaustive list of what is available check out this Disney Parks Blog post so that you can make your list of treats to try. I will, however, recommend the Spider Silk ice cream sandwich from Clarabelle’s – warning, it will turn your mouth black! Disney California Adventure Halloween Time is a bit edgier than Disneyland’s. I’m definitely excited to see what else is in store for this park as it expands its holiday offerings.

Until next time, have a happy Haul-o-ween and carpe kingdom! 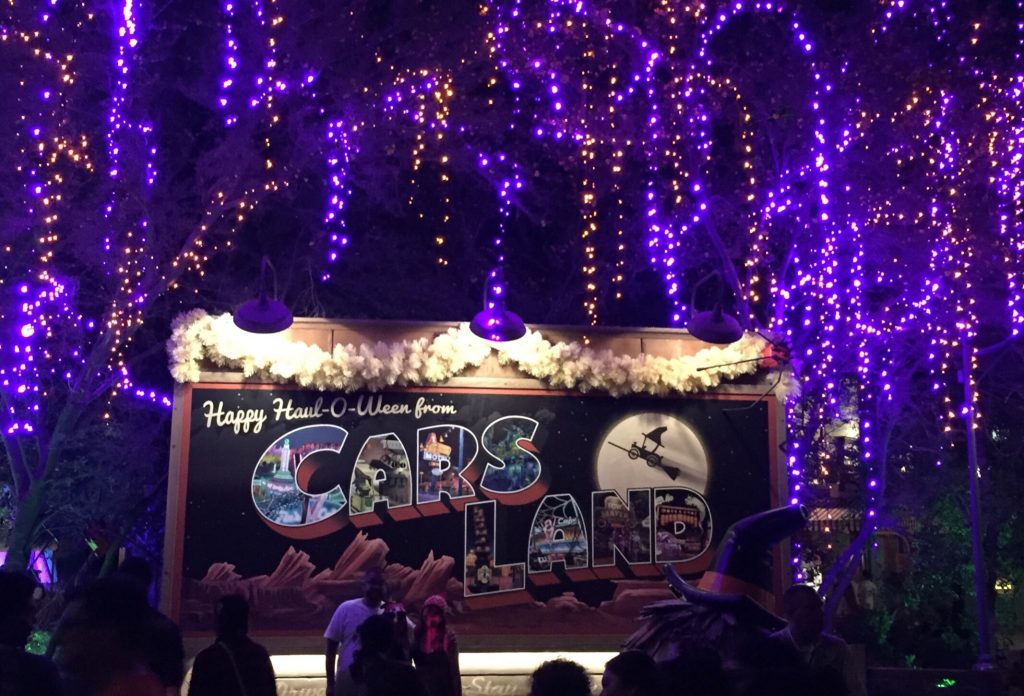