This week, Team Mousetalgia takes you behind the scenes at the world premiere of Magic, Color, Flair: The World of Mary Blair – an exhibit that opened March 13 at the Walt Disney Family Museum in San Francisco, CA. We share our favorite highlights from the new exhibit, join WDFM president Ron Miller in a dedication of the exhibit hall to the late Diane Disney Miller, and then join the VIP opening night gala and capture impressions from Kirsten Komoroske, WDFM Executive Director; Alice Davis, Disney Legend; Pete Docter, Director of the upcoming Pixar feature “Inside Out”; Charles Solomon, author of the upcoming “The Art of Disney Golden Books”; Joseph Titizian, WDFM representative; and Don Hahn, producer of the upcoming feature “Maleficent.” Then, Jeff takes us across the Presidio to Lucasfilm to report on a WDFM event about women in animation, which featured four accomplished female artists who spoke on the work they currently do and the challenges they find today in the workplace. Plus – Elsa and Anna; “The Adorable Couple” – and more! 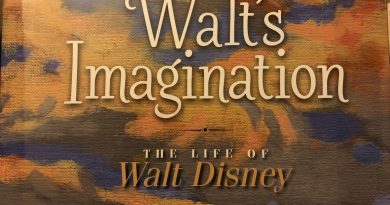