When you think Tiki Room, a few favorite things come to mind and it’s not hard to understand why Walt Disney’s name is stamped on the marquee. The 200+ Audio Animatronics are as memorable as the sweet samplings of the Dole Whips that can be conveniently purchased in the quad.  (What other attractions allow tasty pineapple treats into their Disneylicious interiors?)

This is a safe place where it’s okay to admit that we all thought the Tiki room birds were real at one point or another. It’s not just their beautiful cashmere feathers and stuttered head movements that tricks the smallest (and sometimes not so small) children into thinking that Adventureland is the home to these magical birds.  It’s the audio in these animatronics that have snagged the runner-up position in our Disneyland’s 55th anniversary spectacular.  Out of all the sounds, here are three of my favorites.

Legends of a Feather Flock Together

Sitting through a showing of the Tiki Room is like getting a crash course in the world of Disney voice legends. Thurl Ravenscroft voices Fritz, Wally Boag is Jose and Fulton Burley plays Michael.  (Lets not forget Ernie Newton, the voice of Pierre – while he’s no Disney legend, he still plays one heck of a parrot.)  Boag and Furley were both stars of the Golden Horseshoe Review and Ravenscroft’s Disneyland credits include his work as a singing bust in the Haunted Mansion and his basso profundo as the first mate on the Mark Twain. (Ravenscroft also gave life to the music in a number of Disney animated classics, including some of my favorites, the Sword in the Stone and Sleeping Beauty.) It’s the three legends behind the lines that make quotes like “My siestas are getting chorter and chorter,” “Stop talking while I’m interrupting” and “Applause! Applause!” so memorable. Ravenscroft, Boag, Furley and Newton not only welcome us to their tropical hideaway but manage to convince us that parrots from all corners of the globe call the south seas of Adventureland home as well.

Without songs to sing or stories to tell, talking birds, warbling flowers and chanting tikis would be like the proverbial tree that falls in the woods. Studio staff composer George Bruns (co-composer of The Ballad of Davy Crockett and Yo Ho a Pirate’s Life for Me) was responsible for the bulk of original compositions and arrangements for the Tiki Room.  Other Disney legends, Richard and Robert Sherman provide the musical icing on the Tiki Room cake with their original composition for the Tiki Room theme song. (Those Sherman brothers certainly knew how to write a catchy tune – besides the Tiki Room, who can’t forget It’s a Small World or Winnie the Pooh?)  It’s more than the star power that makes the Tiki lyrics sparkle. A dose of classic 1960’s WED wit has ingrained lines and lyrics into the memories of both hard-core and casual fans alike.

It’s not just the songs and the script that make the sounds of the Tiki Room magical. Some of my favorite sounds include the clacking beaks from the birds of paradise, the mechanical thud of tikis on the drums and of course, the metallic rainstorm resulting from too much celebrating. Disney knew it would take more than a handful of Legends and a catchy Sherman tune to make the Tiki Room memorable. Clacks, whistles, claps, bangs and even the gentle lapping of the Enchanted Fountain round out the Tiki Room’s enchanting soundtrack.

In the immortal words of Pierre:

Our magnificent production is yet to come, so strum the guitar, and beat the drum.
We’ve been a hit, and we know you adore us, so come on and join us in another chorus!   The next time you’re in the Enchanted Tiki Room, remember to take in its sounds and not just the sights. At the end of the day though, it takes birds, flowers, tikis, sights and sounds to make the room an enchanted, timeless place and my penultimate attraction. 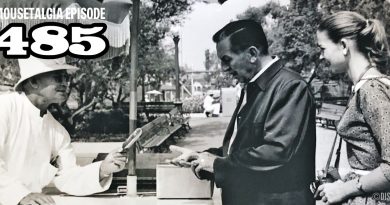