This awkward moment is brought to you by the letter “C” for Club 33. The Mousetalgia gang was given the chance to have lunch at Club 33 the day before the Expo began. Never ones to pass up a chance to eat where Walt had only dreamed of dining, Jeff and I decided to give it a go. We briefly considered our time line for the day – we had exactly 3 hours and 15 minutes to fly from San Jose, check in to our hotels and get to Club 33 by 12:15. This would be followed by an afternoon of picking up our Haunted Mansion Merchandise (lines the previous day had reached a record length of 6 hours) changing for the evening and being at the actual event by 5:00p.m. Whew!

As we savored the final moments of our Club 33 experience (as well as the last bites of the dessert buffet) time was definitely on our minds as we prepared to pay the monstrous bill. Here’s where the $1000 Awkward made its grand entrance. We had been sitting at a table of 10 and eight of those 10 diners were people I had never met, spoken to or even heard of previous to that luncheon encounter. *

While Jeff and I had come equipped with a number of ones, fives and tens in order to make our precise payment, the awkward reality of splitting a $1000+ bill with eight total strangers didn’t really hit us until the clock was ticking and we were about $250 short. That’s right – there we sat with eight strangers and a gaping $250 hole that would either be filled or remain empty thus sending us to Disney jail. Either way, the next few moments were terribly awkward as we checked and re-checked the bill trying to figure what had gone wrong. Hence, my stages of $1000 Awkward began:

Guilt: I started to feel guilty. Had I put in my fair share? Maybe my one Mint Julep had impaired my ability to count and I had somehow shorted everyone. My guilt was so overwhelming, the fact that my individual meal and beverage totaled well under $250 never crossed my mind. It was like I was back in 5th grade all over again and the teacher was reprimanding the whole class for a stolen answer sheet – a theft that I had nothing to do with, but most likely felt far guiltier about than the actual perpetrator. Self doubt had set in and I was ready to pull out my Visa just to end it all when I began to panic.

Panic: At this rate, how would we ever make it over to the Grand Californian and pick up our stuff in time? What if we had to choose between picking up our stuff and attending the event? What if the whole $1000 Awkward turned into an all afternoon ordeal thus foiling our carefully laid schedule, causing us to miss out on everything, resulting in our entire five day trip sinking like the Mark Twain to the bottom of the Rivers of America??? (Considering the depth of the river, it would have been more of a wading versus sinking experience, but at the time, it seemed like an appropriate analogy.) My fight or flight instinct kicked in. The fact that Club 33 didn’t seem like the place to start a brawl combined with my yellow belt Tae Kwan Do skills caused me to choose flight over fight. I was on the verge of my first dine-and-dash when guilt and panic melded into blame.

Blame: There were 10 of us when we were eating dessert, but then there were nine when the bill of awkwardness came. I had thought that one guy looked sneaky. He had been showering his little black rain cloud drops all over the place during lunch and now he was gone. To the bathroom he had said, but really…does it take that long to visit the loo? I had solved the case – It was Mr. Sneaky Black Rain cloud with an empty wallet in the dining room of Club 33.

With a sharpened accusation and a finger stiffened and ready to point, someone figured out what had gone wrong. The $1000 Awkward had almost become Kristen’s Guilty Panic Blame Awkward, but luckily all existing and future awkwardness was put to an end. The bill was paid in full, and we were able to pick up our treasures, change our clothes and make the event on time. In hindsight, would I split a $1000 bill with eight total strangers again? If it means eating at Club 33, yes. Maybe the trade off to not having your own membership is an extra course of awkward.

(*All of the people at our table were super nice and very cool about the awkward moment. Really, it was probably just awkward for me. No names or identities have been used in the writing of this blog to protect those awesome individuals. Again, the awkwardness was mine and mine alone.) 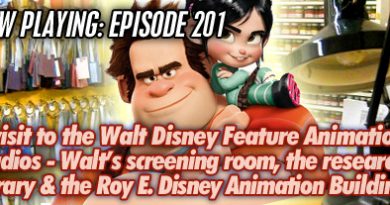 Mousetalgia Episode 201 – A Visit to the Walt Disney Animation Studios