The Disney Studios and nostalgic music take the lead in our second episode covering the recent D23 Expo in Anaheim! Team Mousetalgia report on the keynote Studios presentation at the Expo, and discuss the celebrity appearances, special surprises, and Marvel-ous upcoming films certain to keep Disney fans watching their calendars. Anthony Hopkins, Angelina Jolie, and a plethora of other Hollywood celebrities made appearances to plug upcoming projects, and Disney displayed a strong slate of future films. Also, Richard Sherman and Alan Menken appeared together for an evening of magical music from the Disney songbook, and we have highlights from this much-anticipated presentation. Also, Tony Baxter, the Pixar Brain Trust, Stacia Martin, and others got up on stage and we report on a few of the many panels offered at this year’s convention. Plus – a midnight ride on the Haunted Mansion, Mara’s eyes become even more threatening – and more! 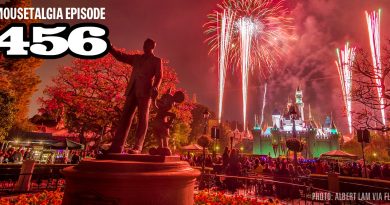